The Hobbit Trilogy has been a source of criticism since it was released in December of 2012. Personally I felt that it relied heavily on the success of The Lord of the Rings Trilogy and never actually tried to make it a stand alone movie series. The first one was overlong and the second improved on the source material but they still felt corny and overly effected. With the debut of the The Hobbit: Battle of the Five Armies trailer it seems that it has improved upon the material even further and looks to be an actually decent movie. I still feel that if was one, maybe two, movies it could have been great but with three movies it feels like they are bloating the run time for no reason. As a whole it could very well be good in the end when you watch all three movies but as individual ones they feel somewhat disconnected.

The Hobbit: The Battle of the Five Armies brings to an epic conclusion the adventures of Bilbo Baggins, Thorin Oakenshield and the Company of Dwarves. Having reclaimed their homeland from the Dragon Smaug, the Company has unwittingly unleashed a deadly force into the world. Enraged, Smaug rains his fiery wrath down upon the defenseless men, women and children of Lake-town.

Obsessed above all else with his reclaimed treasure, Thorin sacrifices friendship and honor to hoard it as Bilbo’s frantic attempts to make him see reason drive the Hobbit towards a desperate and dangerous choice. But there are even greater dangers ahead. Unseen by any but the Wizard Gandalf, the great enemy Sauron has sent forth legions of Orcs in a stealth attack upon the Lonely Mountain.

As darkness converges on their escalating conflict, the races of Dwarves, Elves and Men must decide – unite or be destroyed. Bilbo finds himself fighting for his life and the lives of his friends in the epic Battle of the Five Armies, as the future of Middle-earth hangs in the balance.

Once again this year my top 5 made it out of the Oscars with very few awards, 3 in total and one movie that deserved more awards than it received. This year was by far the strongest year for movies that I’ve seen in a while, I’ve seen a good portion of the Best Picture nominees and I think they all deserved the nominations unlike last year when certain ones made it even though I don’t think they deserved it. It was also a year with two of the greatest comic book movies ever were released and yet neither made it on my list, strange because I praised both The Avengers and The Dark Knight Rises for what they did with their material and the way they handled their villains. I can’t wait to see what the rest of 2013 has to offer, so far this year only Side Effects is a movie I would recommend seeing.

There is a lot I can say about The Master but I’d like to keep it short. I feel that this movie was greatly snubbed at the Oscars for it’s beautiful Cinematography, it’s fantastic writing, it’s keen directing, and all around Best Picture. It is a worthy follow up to There Will Be Blood and by the far the best movie of this year.

Yet another fantastic film by Quentin Tarantino. Finally he has done a western, even though the majority of his film utilize similar aspects from westerns. This was a hard one not to put at #1 due to its great acting, cinematography, directing, and writing. It managed to entertain me and keep me invested in the story.

A lot can be said about Looper, sure it has it’s problems with Time Travel and some logical fallacies but it managed to succeed at telling a story without diving to deep into time travel. It great to see that Joseph Gordon-Levitt is taking risks with his acting, by impersonating the legendary Bruce Willis but I feel that he was able to do it and then some.

Clever, Funny, and completely original, at first I thought it would be silly but it managed to surprise me in every way imaginable. Christopher Walken stands out in such a fantastic cast that it is hard not to realize all the amazing talent in this movie. I never thought a movie about dog kidnappers would be good but boy was I wrong.

I had to update my list because I had not seen this movie originally and not that I have I regret not viewing it sooner. It is a neo-noir that doesn’t focus solely on the violence but on money. A good amount of the shots and scene focus on money and how it cause men to do bad things. I think that the message that it was sending have a very good presence though it can sometimes be to much. The movie is riddled with conversations and not so much on violence. The best part was the cinematography and a stand out sequence is one done in slow motions that shows a killing that I couldn’t see any other way that the way it was presented.

Wow I had no idea that Bradley Cooper could be such a fantastic actor. Everything about this movie is great. The fact that they take the classic romantic comedy and change and make it more touching and heartbreaking is something in itself. I feel that Jennifer Lawrence deserved her win for Best Actress and I can see her having a very successful career. 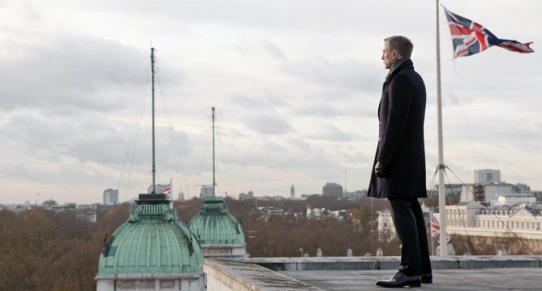 Finally a Bond movie that is more than just a typical Bond film, it is something that questions Bond as a whole, from the gadgets to the Bond girls, making M the true Bond girl in this one. It rewrites it so that it can change what it means to be a Bond film. Sure it channels Straw Dogs at the end but thats what makes it so much fun. “How many times can I use Bond to describe this film”

Definitely deserving of the Oscar, Ben Affleck finally gets his due even though he didn’t win Best Director. I may not have been alive during the Iranian Hostage Crisis but I found the movie to tense yet funny and heart stopping when it came to the end. This is by far Affleck’s best work and cements him as a director that deserves recognition.

The plot may not be entirely the best for a cop drama but they way that they present it is amazing. Combining found footage and actual footage was a smart idea and it shows just how much trouble that cops go through on an everyday occurrence. Not to forget but Jake Gyllenhaal and Michael Pena share so much chemistry that it is hard not to tear up at the end.

Ambitious and certainly an epic film, not many people saw this film but I thought it was breathtaking and a good film that studies the meaning of life. It has fantastic special effects and soundtrack, the cinematography is beautiful. It was a good idea to combine filmmakers Andy and Lana Wachowski and Tom Tykwer.

I know people who claim this is propaganda for Obama’s reelection, which I can agree with since I don’t support Obama or his administration. I found this movie to be filmmaking at it’s finest and the last 30 minutes is some of the best every filmed. It may be controversial but I found it’s soundtrack, cinematography, and editing to be some of the best of the year.

Life of Pi: I never read the book but this movie was emotionally packed. Both the Cinematography and Visual Effects are breathtaking making this movie a beautiful thing to watch

Lincoln: The movie itself was sometimes boring but the performance by Daniel Day-Lewis was fantastic and really shows you the quality of actor he truly is.

Cabin in the Woods: A funny yet scary satire of the horror movie genre

The Dark Knight Rises: Its sad the it didn’t crack the top ten but I found this to be fantastic though not as good as its predecessors but Tom Hardy’s portray of Bane is the high part of this movie. Cinematography wise it is the best of the series.

Battleship: Who thought it would be a good idea to base a movie on a board game. Felt like a Michael Bay wannabe minus the fun

Silent Hill: Revelations: Lacking entirely of scares and felt more like a direct to DVD movie instead of a theatrical one.

John Carter: It may not be the best movie of the year but it certainly fun. It was a great science fiction film that deserved more attention than it got.

Alright so not to many of these nominees are really surprising to me. I mean some nominations do make me ask question like why didn’t Leonardo DiCaprio get nominated and why didn’t Ben Affleck and Katherine Bigalow didn’t get Best Director nominations even though the movies they directed scored some of the best reviews of the year and both nominated for Best Picture. Something that is quite striking is that all for main actors and actress from Silver Linings Playbook got nominated which isn’t a common occurrence and that it scored every one of the important nominations this year. I can’t wait to see who will win these major awards.