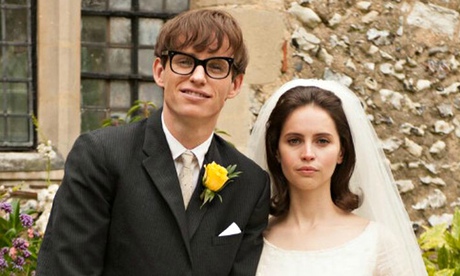 Stephen Hawking is one of the most important and also one of the smartest men working in Theoretical Physic right now. We all know him for his appearance and the disease that caused his predicament. The Theory of Everything decides to focus on his life before his disease and during it but the main focus appears to be him struggling through life with the woman he loves and how he work past his disease to be the man he is today. It is a nice idea to see the life of a man that you don’t know too much about. Hawking is a genius and it seems to be giving the man his due.

Starring Eddie Redmayne  and Felicity Jones, this is the extraordinary story of one of the world’s greatest living minds, the renowned astrophysicist Stephen Hawking, who falls deeply in love with fellow Cambridge student Jane Wilde. Once a healthy, active young man, Hawking received an earth-shattering diagnosis at 21 years of age. With Jane fighting tirelessly by his side, Stephen embarks on his most ambitious scientific work, studying the very thing he now has precious little of – time. Together, they defy impossible odds, breaking new ground in medicine and science, and achieving more than they could ever have dreamed.